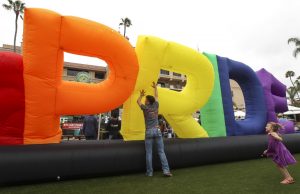 This column is the result of a question I’ve been asking myself lately:

What is “beyond” pride? Another way to put it is: “What comes after Pride?”

I’ve been to about fifty Pride celebrations since I came out (in a men’s group in downtown Manhattan in 1983). My first Pride celebration reminded me that: no, I wasn’t a second class citizen. I wasn’t a deviant (as I’d been raised to think in my rural Ohio upbringing). I was just as good, kind and wholesome as any straight person.

As I continue to wonder about what’s beyond pride, I’m curious about the relationship between “pride” and “power”.

In the past, we needed to have pride in ourselves because the people in power – heterosexuals – kept us in a one-down position for many years. So, we were struggling for equality. We wanted to have just as much power as straight folks.

And, once we get it, then what? I wonder if compassion comes next.

Many people who struggle to be powerful and achieve it find themselves in a very unfamiliar place: what do they do with all that power? Ideally, they will begin to share it with others who are not yet so empowered. However, in the real, greed-filled world driven by consumer culture, that power is often hoarded: “I’ve got mine and – honestly – I don’t give a damn whether you ever get yours.”

A prime example of this is the Trump administration: they use the power of the Presidency to dis-empower people. The only folks they em-power are rich folks (like them) who already have plenty of power and are afraid they may lose it to the LGBTQers, people of color, women, religious minorities…anyone who isn’t just like them.

That’s clearly an example of what not to do with power. As we become more-and-more empowered (and we are, we certainly are!), how will we use our power? Can we become:

This is quite a tall order.

It’s not so easy.

I love to travel to small towns and rural areas. My conversations there are often with people who certainly aren’t doing things “my” way. It is a continual lesson for me not to judge these folks.

Despite all our Pride, I notice that, even within our LGBT community, fear of each other continues to divide us. Since I moved to San Diego 21 years’ ago, I’ve seen and heard one form of fear – misogyny – repeatedly rear its ugly head. Am I the only one who has been in (mostly gay male) social situations and heard women put down or slammed as “taking over” the institutions in our community?

Can we replace fear, in its many forms (e.g., ageism, racism, misogyny), with acceptance and celebration of our differences? Easy to say; hard to do.

I’d like to close with “humility”, one of my favorite virtues. As a young queer guy, I thought there was little place for humility. Humility seemed to be about playing small. The older I get, I see the power of humility: when you really know who you are and feel powerful in your abilities, humility is very attractive.

So, my fellow LGBTers (and straight allies), as we welcome Pride 2019, let’s look further down the road and see what lies ahead. Some pretty wonderful experiences lie waiting for us, out there… beyond pride.