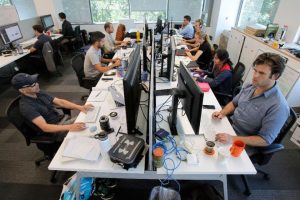 This is a tale of two men. The first guy, Carlos* was in his mid-thirties. When I met him, he talked so fast and thought so rapidly that I wondered if he suffered from ADHD (he didn’t). The second guy, Daniel* was a little older than Carlos, but had the same way of talking and acting: fast, fast, fast! Everything needed to happen now. He was a man on his way to the top of his profession and he didn’t want anything to get in his way or slow him down.

Both these guys were moving fast, yet never satisfied. They both had good jobs and boyfriends, although not many close friends because they “didn’t have time” to devote to friendships.

They differed in one way: Carlos was willing to change; Daniel wasn’t. Today, Carlos is, honestly, one of the happiest people I know. He has learned to really enjoy his life and to slow down (mentally, verbally and physically). He ultimately ended his relationship with his boyfriend (another frantic person) and found a new boyfriend who’s much more grounded and mellow. Carlos also cultivated a loyal circle of friends that he enjoys spending time with.

Why was Daniel unable to change like Carlos? Daniel was externally-focused and very career-driven. He was determined to get to the top of his profession and be medical director of a hospital. His own self-identity was based on career success: without that achievement, he felt like he was nothing.

Carlos really liked his work, but it wasn’t his everything. He too had a high-stress job, working as an executive for a huge multi-national firm. But his identity wasn’t based on his job.

“What does this have to do with me?” you may be asking.

Everyone I know feels pressure to move fast, achieve exciting things and have a nice house/car/partner/job. Thanks to social media, we mainline what I call, “The (Fake) Facebook Life”: the life of illusions that you get from looking at other people’s Facebook/Instagram pages.

On social media, other people’s lives look so amazing: look where they are on vacation! Look how amazing they look in the gym! Look at their new car/house/husband!

The result of all that comparison? We feel like we’re losing out/moving too slow. We are not having enough fun/sex/money and, as a result, we push ourselves to move faster, faster, faster!

Get off your phone: get out into the real world and talk to people. Have lunch/go for a walk with a friend. Be around real people with all their flaws and foibles. You’ll feel less inferior and more “normal”.

Any time you’re around beautiful people – in Hillcrest, at the gym or the beach – instead of comparing yourself to all the best-looking people, focus on the wide range of people there: beautiful and not-so, young and old, lean and heavy…see the full range of human potential and know that you’re somewhere in the middle (like the rest of us).

Be like Carlos: find a way to get off the endless treadmill (or hamster wheel, as my grandma used to say). Find ways to enjoy life more, live less frenetically and find satisfaction wherever you go. Carlos did it; so can you.

*All names and identifying information have been changed to ensure confidentiality